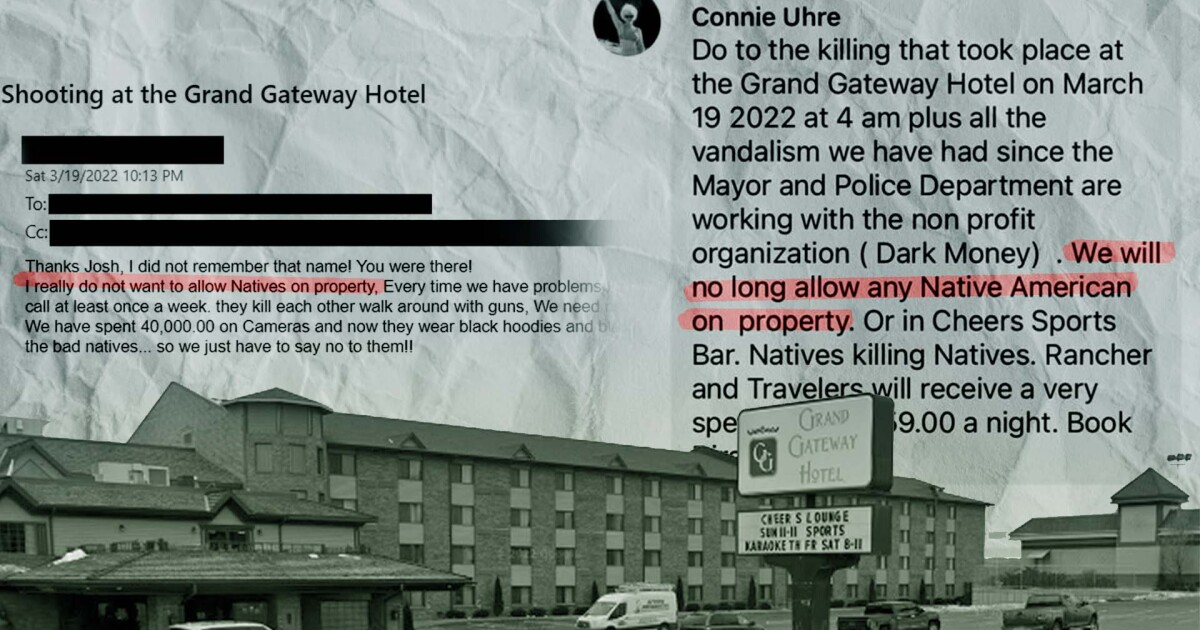 The workers quit, a lawsuit is pending after a business owner demanded a ban on Native Americans at the Grand Gateway Hotel in Rapid City.

The hotel manager said the hotel does not support the owner’s statements and will not enforce a ban.

But Red Elk Zephier said it did not influence him and others who quit their jobs at the Grand Gateway Hotel and Cheers Sports Bar.

“I can’t let that be part of my life, that negativity. So I just don’t want to be associated with that,” said Zephier, who is Yankton Sioux and Oneida. “I didn’t even think about the money or anything, I just can’t have that in my life.”

Zephier said all bar staff and some hotel employees quit because of the proposed ban.

He said the former workers were a mix of Native Americans and non-Natives, and some of his regulars told him they wouldn’t be returning to the bar.

Zephier and his colleagues are not the only ones taking action.

“I will never set foot there again,” said Paul “DJ Pauly G” Geissler. He spoke to SDPB News after posting a video on Facebook saying he would no longer be DJing at Cheers.

NDN Collective, the American Indian Movement and the Cheyenne River Grassroots Collective organize a demonstration on Wednesday. The march will end at the federal courthouse where the organizations say they will file a lawsuit against the hotel owners.

The Oglala Sioux Tribe is asking all Native Americans to contact the tribe if they have experienced discrimination at the hotel.

Banning Native Americans or any other racial group from a hotel would violate the public accommodation section of the Civil Rights Act of 1964, said Rapid City attorney Joel Landeen.

The law makes it illegal to ban — whether through laws, written policies, or de facto policies — a racial group from hotels, movie theaters, restaurants and other facilities.

Connie Uhre is the president of Retsel Corporation, which shares an address with the Grand Gateway Hotel, according to documents filed with the South Dakota secretary of state.

The Grand Gateway also has the Cheers Sports Bar and a Perkins Restaurant. It is a sister property of the Foothills Inn.

Connie Uhre has called for a ban on Native American guests after a recent fatal shooting at the hotel.

Quincy Bear Robe, 19, faces criminal charges and is in jail on $1million bail after allegedly shooting Myron Pourier Jr. Pourier is in his late teens, according to a police spokesperson.

Nick Uhre is listed as one of the directors of the company and identified himself as Connie’s son and the hotel manager.

“Natives are welcome at the Grand Gateway Hotel, always have been, always will be,” Nick wrote in an email to the SDPB.

The cheer bar also addressed the issue on his Facebook page, saying they are saddened by the shooting and hope the teenager recovers.

“We apologize if some members of our community had a knee-jerk reaction who said things that do not reflect the values ​​of Cheers, the hotel or our customers. We will express ourselves in a more professional manner,” the message reads. .

The post calls for unity while blaming the MacArthur Foundation for “destroying” Rapid City.

The MacArthur Foundation is a nonprofit organization that has provided millions of dollars to fund criminal justice reform programs, including in Pennington County.

“We will no longer allow any Native Americans on the property or in the Cheers sports bar. Natives killing Natives,” Connie wrote on Facebook after the shooting.

Connie’s comment drew attention after Rapid City Mayor Steve Allender posted his review and a screenshot of his message on Twitter.

In addition to blaming the mayor, the police chief, the sheriff, the sheriff’s candidate and the justice system, a local hotel bans all Native Americans for shooting a few days ago on the property of the hotel. Neither the shooting nor Grand Gateway’s response reflects the values ​​of our community. pic.twitter.com/vA9oXND0qi

“Steve Allender incited violence and he put a target on my back, my family’s back, my staff’s back, my guests’ back,” Nick wrote in his email to the SDPB.

Nick said the mayor’s comments were an impenetrable offense and Governor Kristi Noem should remove him from office.

He said the hotel was not taking any new bookings at the moment because he and the company were receiving threats.

“I hope every business you own is burned down. You will always have to watch your back,” one man wrote in a post Nick shared with SDPB.

Nick said he reported the threats to police who he said didn’t care and didn’t take the crime seriously.

Brendyn Medina, spokeswoman for the Rapid City Police Department, said the department has not received any reports of threats.

An email calling for a ban on Native Americans is also circulating on social media.

“I really don’t want to allow natives on the property,” the email read in part. “The problem is that we don’t distinguish the good guys from the native bad guys… so we just have to say no to them!!”

SDPB obtained a chain of emails confirming that Connie Uhre sent the email. However, one of the online versions appears to have been manipulated to look like Nick sent it.

Nick started the chain of emails, which he sent to the area’s hospitality management. He alerted the recipients of the shooting, encouraged them to stop paying taxes, and criticized the MacArthur Foundation.

Connie responded to the channel with her call to ban Native American guests. Nick then responded with a graphic photo of the shooting scene but did not respond to his mother’s comment.

Several hotel executives responded to the chain, all with criticism.

“These views are abhorrent and have no place in our community let alone our industry,” wrote one hotel manager.

“Take me off this disgusting chain of emails. And don’t put another one on me in the future, Nick,” another replied.

“Your racist rant is unwelcome and it’s not your audience,” one executive said. “I understand the initial frustration with the MacArthur grant, but it’s not the right way to go about it.”

Other managers have asked Nick to send customers the hotel doesn’t want in their establishment.

Nick and his mother have been critical of law enforcement in Pennington County and Rapid City, particularly their reform programs funded by the MacArthur Foundation’s Security and Justice Program. They blamed the violence and crime programs in Rapid City.

Nick spoke about crime, homelessness and race on his Facebook page. He used the phrase “Native vs. Native crime,” criticized and posted pictures of homeless people, and told KOTA-TV that there should be laws prohibiting Native Americans from consuming alcohol and alcohol. sugar.

Zephier, the former bartender, said he never met Connie Uhre. He said he heard second-hand stories about racism at the hotel, but did not experience or witness it from Nick or anyone else. other.

“What’s been said is already said and I think they may have shot themselves in the foot,” he said.

Can the government act?

Landeen, Rapid City’s attorney, said Tuesday morning that the city has not received any complaints about the Uhre family’s comments, but will investigate anything it receives.

He said the city has referred and helped people file complaints with the federal government, which handles federal civil rights violations. The city also offers voluntary mediation through the Human Rights Commission.

The South Dakota U.S. Attorney’s Office said it had no comment when asked if it had received any complaints or opened an investigation.

The DLR has not received any complaints related to the incident, but would investigate any it receives, spokeswoman Dawn Dovre said on Tuesday afternoon.

The division has a number of ways to remedy a complaint if it deems the charge to be justified, according to its website.

The complaint may be dealt with through voluntary settlements, the state Human Rights Commission, or a state court. The Attorney General or State Attorney can also bring an action.