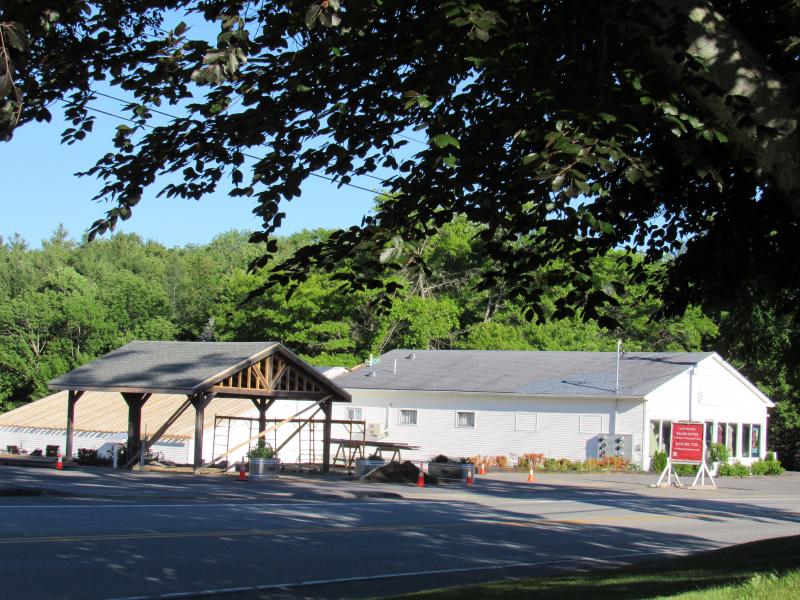 ROCKPORT – On June 24, the Rockport Planning Council considered a pre-application submitted by Stephanie Turner to operate a take-out restaurant business in a 20ft x 20ft building at 330 Commercial Street, the property on the corner Avenue Pascal and Commercial Rue (Route 1.)

The board asked the applicant to return with revised site maps and additional material before a change in use could be granted to allow a food business on the site.

The meeting also included the approval of a final site plan submitted by Revision Energy for the construction of a rooftop solar panel at the Midcoast Recreation Center (MRC).

The planning board voted to maintain a proposed subdivision off Wellington Drive and Old County Road, pending further documentation requested by council from the applicant, Mr. Richardson LLC.

In the request she submitted to the municipal office, Stephanie Turner said her project, “Street Food”, would consist of serving plant-based takeout from 330 Commercial Street, as well as providing parking for a maximum of three food trucks and vendors. The location, which is owned by Douglas Clayton, is currently home to a wedding dress store and a number of hair salons. Referred to in signage as “Rockport Center,” the land was once a car dealership.

Currently, a 20’x20 ‘building is under construction on the site, adjacent to the commercial building which houses the existing businesses.

Turner said this new building would contain the take-out operation. She said there was at least one food truck that might be interested in operating from the site, and hoped to invite vendors to sell â€œfarmers marketâ€ type products from tents. Turner would rent the space from Clayton and appeared before the planning board to request a change in use from the site’s previous use as a car dealership to sell food on site.

At the start of the meeting, President Joe Sternowski said the site is still technically considered a car dealership, even though there hasn’t been a lot of cars there for over a decade, and despite the fact that the lounges operate from the existing commercial building. He said Clayton never went to the board to ask for the use to be changed.

â€œYou’re talking about changing the use of a car dealership from what it used to be to something else, so you need to look at a [zoning] table and decide what you’re going to change it to and if it’s allowed in that district, â€he said. â€œSo this land use ordinance is a document available on the city’s website, you have to go through it. I might suggest that you consider hiring a professional engineer as it sounds like some of the things you do here with ‘access to a national road’ and parking … it’s up to you, but you might need help with this. “

“I live just around the corner, so I’m a bit close to that because I feel like [the propertyâ€™s] just kind of a mishmash of everything that comes with saying “let’s try to put something in there” and charge money for it. And it’s starting to look like a mess, doesn’t look like a blueprint, doesn’t seem organized, it’s not a good aesthetic, â€Vice President John Viehman said.

Sternowski suggested that applicants review video footage from previous planning board site application hearings to get a better idea of â€‹â€‹the process. Turner said she plans to return next month with a final plan for the takeout operation.

Solar panel at the MRC

Alex Roberts-Pierel, solar developer at Revision Energy and Craig Wilson, director of the MRC, appeared before the council to present their final site plan for the construction of a solar array on the roof that would provide energy renewable at the West St. Recreation Center.

“This year [MRC] celebrates its 20th anniversary and we are excited to live the next 20 years, but we need to do it smarter, more carefully and more effectively if we are to be successful. Solar energy is therefore part of the way for us to achieve this. Solar energy is cleaner, it saves money and takes us away from the grid, â€Wilson said.

The plan calls for approximately 23,000 square feet of solar modules placed on the east and west rooftops of the building. This network would produce up to 438,500 kilowatt-hours of energy. Work on the site is expected to begin this summer or fall and be completed within two months. The owner / operator of the grid â€œwill be an impact investor who sells electricity produced from renewable sources to MRCâ€. The board unanimously voted that the plan met all required performance standards and approved the final site plan for the project.

Mr. Richardson LLC, represented by Surveyor Mark Ingraham of Ingraham Land Consulting, has proposed a four lot subdivision located on the City Plan 6, Lot 65-001, Zone District 904, which is a residential area. The site is located off Old County Road. Three of the lots would be approximately 2 acres in size; the remaining 18 acres would be divided into two parcels: a 9 acre lot would be developed and the remaining 9 acre lot would be retained by the owner, Mr. Richardson.

The final site plan review scheduled for June 24 was a continuation of the project by the planning board at a previous meeting. On June 24, the board upheld the prorogation, requesting that additional documents and conclusions be presented at an upcoming meeting before final approval could be granted. The board of directors granted an extension to the project, including that a five-year development moratorium be imposed on the remaining lot and a stormwater treatment plant installed.

The next Rockport Planning Board meeting will be July 22 at 5:30 p.m. at the Rockport Opera House.