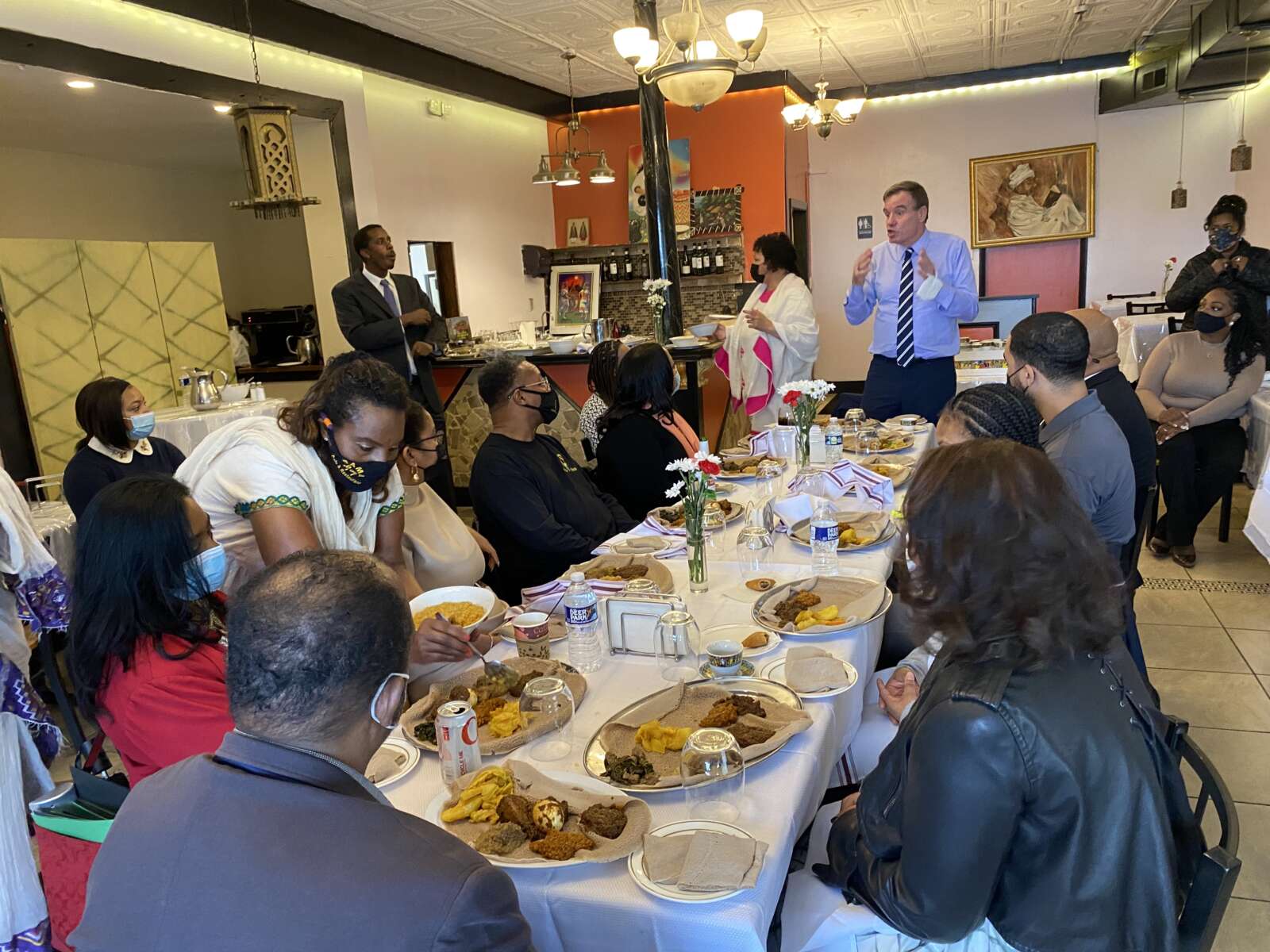 Many small businesses in Arlington are hurting amid the pandemic, and that adds to some of the unique issues facing black and female business owners.

That was the topic of a pair of talks held by Sen. Mark Warner (D-Va.) in Arlington Friday, Feb. 4.

During plates full of Doro Wat and injera, Warner met with local black business owners at Dama restaurant on Columbia Pike to discuss the current challenges they face and how the government can help them with better access to capital.

Attending the luncheon were business owners from across Arlington and Northern Virginia, including owners of Greens N Teff on Columbia Pike, Elliot DeBose of Sol Brothers CandlesSofonias Gebretsadick, owner of Café Idido, and Lauren A. Harris of Academy of Little Ambassadors on Langston Blvd.

The 45-minute conversation covered federal Covid-related loan programs, the need for mentorship, how to simplify access to capital, and discrimination against black-owned businesses.

Before the discussion, Warner explained how he failed twice as an entrepreneur before breaking into telecommunications. He said he understands what it takes to be a business owner, but only from his own perspective.

One of the biggest challenges that kept coming up was not the availability of federal funds, as Paycheck Protection Program loans, but easier access to it. That means simplified apps and improved messaging and communication, to make sure minority-owned small businesses know the money is there.

Harris, owner of the almost ten year old Academy of Little Ambassadors preschool, said his biggest criticism was confusion about how to access capital. As she is very focused on the day-to-day of her business, Harris said it was difficult to navigate all the paperwork and know exactly where she should turn for help.

“I think as a small business owner, sometimes it’s really hard to know where the support is coming from,” she said.

Questions like what’s forgivable for loans, which funds have the longest turnaround time, and which companies with 50+ employees can apply are often on Harris’s mind, but clarity of answers may be lacking. .

At one point in the conversation, a recommendation to create a “one-stop-shop” type of website where all available grants, loans and programs are listed was mentioned, in which Warner agreed that it was necessary to produce.

Beakal Melaku, co-owner of Greens N Teff, said the restaurant’s experience as a brand new business highlights the need for additional help with marketing and customer outreach. The money to do this would go a long way, he says, but he doesn’t know where to turn for it.

The question of childcare was often raised both at the business round table in Dama and at the AWE Businesswomen Summit which was also tracked by Warner on Friday.

Without appropriate, consistent and affordable child care, noted several attendees at the Arlington Chamber of Commerce-sponsored event, it can be difficult for small business owners, especially women-owned businesses , to stay afloat.

Warner has touted what he calls the “BBB Girl”, the revised version of the “Build Back Better” law that many Democrats still hope for a chance to become law.

“It would be a record investment in childcare like we’ve never seen before,” Warner told Dama’s group. “It’s about building capacity and building affordability.

The senior US senator from Virginia also went out of her way to compliment Arlington County and its leaders. With Dorsey seated next to him, Warner said small business owners should be able to turn to the county first for smaller grants and localized issues. During the pandemic, the county held two rounds of grant applications for small businesses.

“There’s a county government here that’s really supportive,” Warner told ARLnow. “In many communities, you don’t have that buy-in to diversity and immigration. You must have every part of the community to succeed if you want the county to succeed.

However, not everyone was equally complimentary of the county. Harris said there needs to be better communication and messaging about health regulations, especially around childcare. She says a big part of her job these days is communicating with parents about the latest quarantine policies, regulations and guidelines.

“I think we need better messaging at this stage of the game,” she said.

Warner said his takeaway from both the Pike Roundtable and the Women in Business Summit, held at Marymount University’s Ballston campus, is that aid can be there, but that there needs to be a better process to get it to the businesses in need. .

“What I’ve heard most is that the help given by [federal] was great, but the disaster is not over,” he told ARLnow. “We’ve lost so many small businesses, especially businesses of color, and a lot of these programs need to continue, just a little streamlined. There remain issues of access to capital and challenges if you are a women-owned business and/or a business owned by a person of color.