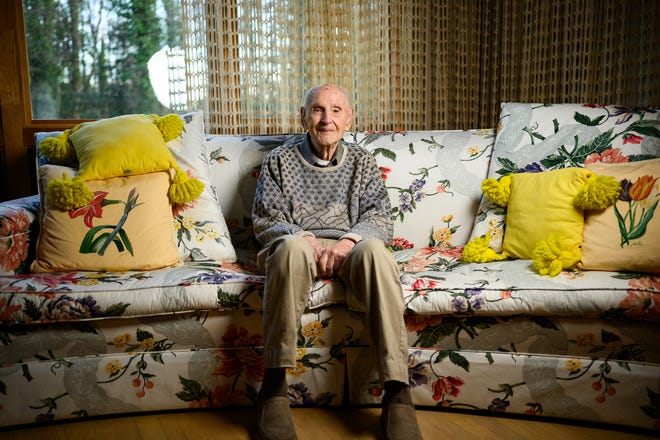 Stan Sedran, a World War II veteran and lifelong businessman who was integral to the revitalization of downtown Greenville, died Thursday, May 12. He was 101 years old.

After serving in the US Air Force, Sedran ran Sedran Furs on North Main Street downtown for over 60 years.

He lived by the golden rule – treat others as you would like to be treated – and his signature: “It’s not what you know, it’s who you know.”

His daughter, Cindy Sedran, described her father as a man of integrity and humor.

Sedran was born on January 11, 1921 in the Bronx, New York. He was the second of two boys born to Joseph and Pauline Sedran.

He was drafted into the war in 1942 at age 21. Named an Air Force bomber, Sedran flew B-25s, which became one of the most heavily armed aircraft in the world, according to Boeing. It flew missions across North Africa, Italy and France, following American infantry.

In a 2021 interview with The Greenville News, he spoke about the scars the war left on him.

“I lost a lot of friends. I’m responsible for killing a lot of people who spoke a different language,” Sedran said. “And to this day, I realize what I went through, throwing bombs at people I didn’t know. They had families.”

But, “It was the right thing, because we wouldn’t be here if it wasn’t for that,” Sedran told The News.

Stan and his wife, May, came to Greenville in 1953 to start their fur business. At first they had a store where the Hyatt hotel is now. A few years later they moved to the corner of North Main and College Streets, where they remained for 35 years.

They had a successful business, Cindy said. In the 1990s, they had over 5,000 furs to put away for the summer, “showing how much business they brought to Greenville,” she said in a note.

The Sedrans have seen the city change and grow.

“I really liked Greenville,” Sedran previously told The News. “I saw what I still see today, things that can be improved so much, and growth.”

Not just a business owner, Sedran was also involved in civic life. The city of Greenville once gave Sedran a “service appreciation” award after he served on a local community development task force, Cindy Sedran said.

“Stan was a beloved Greenville original,” Mayor Knox White said in a text message. “For generations, he and his business on Main Street were the heart and soul of downtown. I always appreciated his insight and embrace of the city he loved.”

Sedran found out in 2015 that his lease would not be renewed on Main Street. Moving would be too expensive, so he sold his inventory and moved to the suburbs at Taylors.

He was still active in the community after his retirement. Stan has been a member of two nonprofits, the Kiwanis Club and Sertoma Inc., for more than 50 years, Cindy said. He received awards for perfect attendance for 12 consecutive years.

“He was my mentor and my best friend,” she said.

Macon Atkinson is the city watch reporter for The Greenville News. She is fueled by long runs and strong coffee. Follow her on Twitter @maconatkinson.