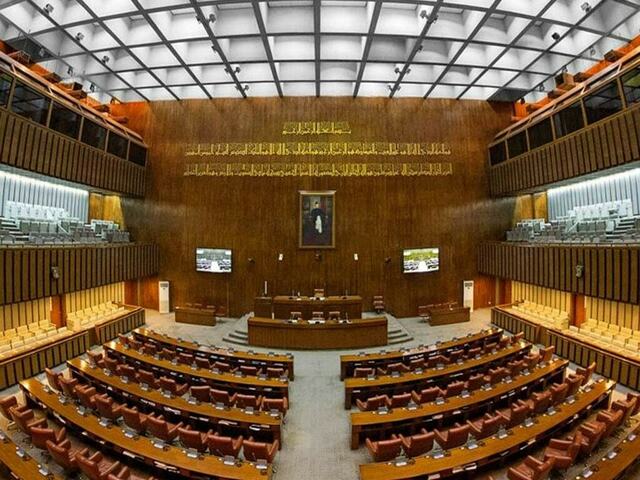 ISLAMABAD: Amid fierce protests from the opposition, Finance Minister Miftah Ismail tabled a copy of the Finance Bill 2022 in the Upper House of Parliament on Friday, seeking recommendations from senators on the proposed bill.

The chamber, during its session, experienced turbulence as soon as the Senate President, Sadiq Sanjrani, gave the floor to the Minister of Finance for tabling a copy of the bill in the chamber.

The Senate session continued for just over 15 minutes and the session was adjourned until next Monday, immediately after the finance minister tabled a copy of the money bill in the House.

Constitutionally, the upper house of parliament can hold an in-depth debate on the finance bill and make recommendations accordingly, but it has almost no role in budget legislation since it is entirely up to the National Assembly to fully or partially accept these recommendations or give them an outright rejection.

Earlier, senators from both sides of the aisle, led by Sanjrani, marched to the Indian High Commission in the federal capital and protested before the commission against the blasphemous remarks made against the Holy Prophet Hazrat Muhammad (whom peace be upon him) by Bharatiya Janata Party Leaders (BJP), Nupur Sharma and Naveed Kumar Jindal.

“Every Muslim is ready to sacrifice everything for the good of the Holy Prophet (PBUH). Such sacrilegious remarks are not acceptable and must be condemned in the strongest possible terms,” Sanjrani said in his speech to the Indian diplomatic mission.

The blasphemous statements by Indian leaders have been strongly condemned by both Houses of Parliament and the people of Pakistan express their deep sorrow and anger, he added.

“Millions of Muslims in the Islamic world are ready to sacrifice their lives and property for the Holy Prophet (PBUH),” said opposition leader Dr Shahzad Waseem.

Hindu senators Keshoo Bai and Danesh Kumar were of the view that no religion allows disrespect to another religion.