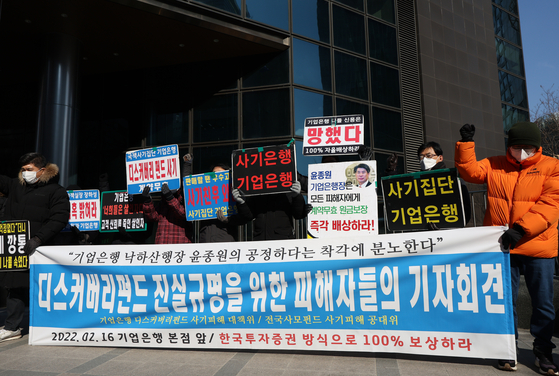 Investors in Discovery Asset Management on Wednesday demanded that the fund management company and the state-owned Industrial Bank of Korea repay 100% of their investment loss outside the bank’s headquarters in Seoul. [YONHAP]

Discovery Asset Management, a troubled fund company under investigation, has senior administration officials among its investors who are the architects of Moon Jae-in’s key policies.

The information was released Wednesday after a year-long review by the Financial Services Commission. While no wrongdoing has been found to date with respect to their involvement, the Blue House’s connection to the fund manager raises issues of conflict of interest and possible favouritism.

Discovery Asset Management operated funds that invested in US assets. In 2019, the United States Securities and Exchange Commission accused the company managing the portfolio in the United States – Direct Lending Investment (DLI) – of fabricating values ​​and returns, and the funds were frozen.

A total of 256 billion won of investor money is now unavailable to investors.

The funds were marketed through the Industrial Bank of Korea (IBK) and 12 brokerage firms between 2017 and 2019.

After the review, Discovery Asset Management’s operations were suspended for three months and CEO Jang Ha-won was banned from working for three months, sanctions previously recommended by the Financial Monitoring Service.

IBK, which sold about 30% of the funds, was fined 4.7 billion won and some of its business operations were suspended for a month. 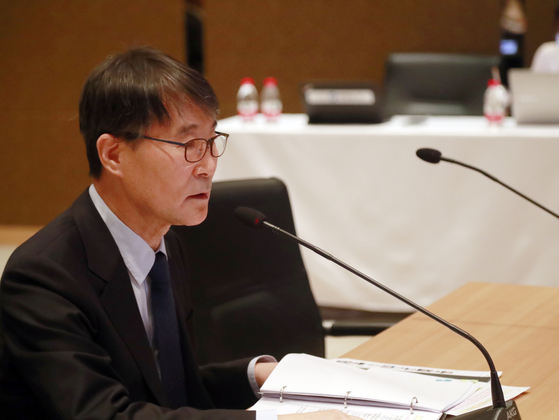 Jang Ha-sung, a former professor of finance at Korea University’s business school, is the mastermind of Moon’s revenue-driven growth policy, which was designed to transform Korea from a dependent country exports into a domestic demand driven economy.

According to the report, Jang Ha-sung and his wife invested 6 billion won in the fund.

It was found that Kim Sang-jo, Blue House policy chief for Moon and the first chairman of Moon’s Fair Trade Commission, had invested about 400 million won in the funds of the fund management company. .

According to local news reports, Jang Ha-sung and Kim have secured favorable contracts, which allow them to cash in early while other investors must stay in the fund until maturity.

The asset management company was established in 2016 with registered capital of 2.5 billion won, and as of the first half of 2017, it had approximately 50 billion won in assets under management. The Moon administration began in May 2017.

Investors in the fund included professors from Korea University.

Both officials have denied all charges. Through statements, Jang Ha-sung and Kim claimed that they did not break any laws regarding investments made by officials.

Seoul Metropolitan Police banned Jang Ha-won, CEO of the fund management company, from leaving the country and summoned him for questioning on Feb. 9 on charges of intentionally covering up the unrest while continuing to sell funds to investors.

Discovery Asset Management argues that it is just a victim of the US fund management company and will do everything possible to recover funds intended for investors.

The asset management company added that Jang Ha-sung, the ambassador, has not repaid his investments and is in the same situation as other investors.

La Maison Bleue has ties to other troubled fund managers.

The CEO of Co-link PE, who was arrested for embezzlement, is the cousin of Cho Kuk, a former Blue House anti-corruption secretary and justice minister under the Moon government. Cho’s wife was a major investor in the fund.