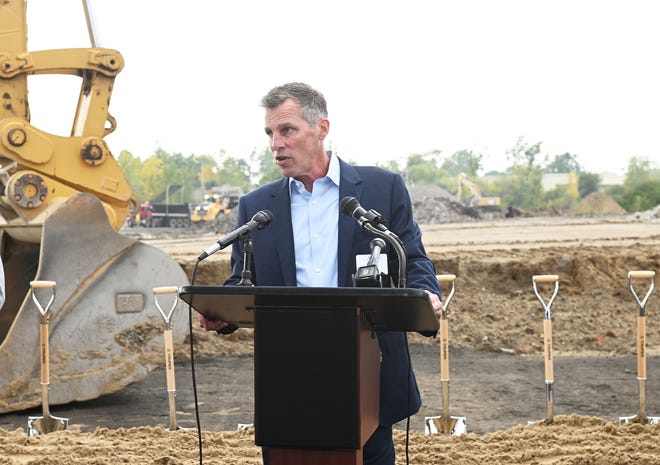 Detroit – Authorities on Monday celebrated the start of construction of a $ 48 million complex on the site of the former Cadillac Stamping plant in the east of the city.

Named the M3 Commerce Center, the site along Gratiot Avenue and Conner will house Lear Corp. because it makes seats for GM’s Factory Zero assembly plant in Detroit / Hamtramck when it opens in mid-2022. The center is named Gratiot, also known as M-3.

“We love the Detroit industrial market, we really love the direction the city is taking and we’ll be pouring concrete soon… we’ll have a roof over the building and the walls around it,” Tim Conder, vice president of acquisitions for NorthPoint Development, based in Missouri, said Monday at the grand opening. “This is a really exciting time in Detroit and on behalf of NorthPoint Development we are proud to be a part of it. “

Conder was joined by several officials as they ceremoniously turned the earth at the site to mark the occasion. Construction machinery rumbled across the site as crews worked on the 43-acre property.

Lear will occupy nearly two-thirds of the 684,000 square foot building and is expected to create 450 jobs in the city. He signed a deal with Detroit at Work to give Detroiters the first chance to access available jobs, said Nicole Sherard-Freeman, the city’s group manager for Jobs, Economy and Detroit at Work.

Frank Orsini, executive vice president and chairman of seating for Lear, said the company is committed to Detroit and looks forward to supporting GM’s vision of bringing more electrified vehicles to market.

“We plan to create a facility that will be one of the most energy efficient facilities in Lear’s global industrial footprint,” he said.

Mayor Mike Duggan thanked NorthPoint Development for taking over the old stamping plant site, an idea he said he pitched to the company three or four years ago.

“I can’t say enough about what they mean for this city,” he said. “When they decided to build the vehicles of the future at Factory Zero, they made another promise to Nicole and me. Whenever they chose a parts supplier, they would call us first… so we could have a chance to introduce them. a website. … I had the pleasure of calling Ray Scott, the CEO of Lear and saying, “I have good news for you and by the way, I have a site for you.” “

Kevin Johnson, CEO of the Detroit Economic Growth Corporation, said the development is an example of the agency’s work to prepare other sites for construction.

“This project is at the very heart of what we want to do in the city of Detroit, which makes this development attractive for new investment and new jobs for the people of Detroit,” he said. “By putting more resources into contaminated sites and dilapidated properties. and productive use, we are creating a larger inventory of ready-to-shovel parcels that Detroit needs in order to receive more investment.

The stamping plant dates back to 1925, when it was built for the Hudson Motor Company. Designed by Albert Kahn, the plant sent auto bodies to the Hudson Main Assembly Plant on Jefferson Avenue. GM bought the plant in 1956 and used it to build hoods, fenders, and bumpers for Cadillac cars. The 915,655-square-foot plant has remained almost unoccupied since the 1980s; Ivan Doverspike ran a limited operation there until 2015.

This summer, the site received a $ 1 million Renew Michigan grant through the Wayne County Brownfield Development Authority to help clean up the site.

“A century of industrial and commercial exploitation on Cadillac’s stamping property has left a legacy of contamination,” said Liesl Eichler Clark, director of Michigan EGLE. “Potential sources, to name a few, include metal pressing and stamping, electroplating, dry cleaning, paint byproducts, old railroad operations and coal storage. . You can see that there are definitely things to deal with.

Other incentives include the approval by Detroit City Council of a 12-year tax break for the project in January. In December, the board of directors of the Michigan Strategic Fund of the Michigan Economic Development Corp. approved $ 3.3 million in brownfield tax credits.